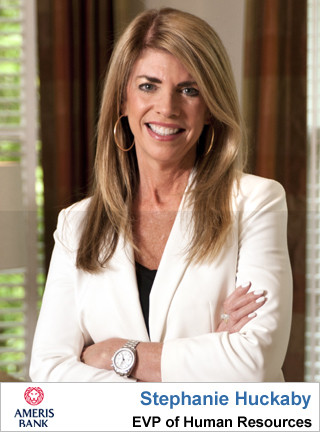 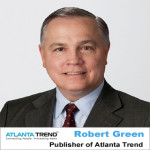 Recruitment, retention, motivation, leadership development and the growing of corporate culture have never been more important to companies. But these facets of HR are critical in a teammate-first culture.

"It’s a lot to consider at the same time," says Stephanie Huckaby, EVP of Human Resources at Ameris Bank, " But it’s important to prioritize each of these areas to put our people first and continue growing as a company."

Having worked in human resources for almost 30 years, Stephanie has seen a lot of changes in HR. After graduating from Auburn in 1992, she accepted an HR position to work at Colonial Bank in Huntsville, Alabama. "I had worked as a teller during college, so it seemed like a natural progression to stay in the banking world as I pursued a career in HR," she says.

In 1994, she moved to Birmingham to become the HR Manager for the Southern division of Altec Industries, a custom truck manufacturing company that produced specialized vehicles for power companies, among other special requirements. "We had over 700 employees and I supported both the manufacturing and the corporate side," she says. "Seeing the company through union matters gave me unique training and experience that I took back to the banking industry."

Stephanie moved to Atlanta in 2000 to become VP of Human Resources for Fidelity Bank and eventually promoted to EVP of Human Resources. "When I joined the company, we had approximately 300 employees," she says, "and today we have almost 3,000." The bank is an over $20 billion asset institution - now Ameris Bank following its acquisition of Fidelity in 2019. She is now EVP, Managing Director of HR for Ameris.

Prior to the merger, Fidelity had 62 branches in Georgia and Florida and was an approximately  $4.8 billion institution. The combined bank assets with Ameris and Fidelity at the time of the merger was approximately 16 ½ billion (Fidelity approximately 4.8 Billion and Ameris approximately 11.7 Billion), which made the combined bank the 104th largest insured depository organization in the US, the 6th largest insured depository organization in Georgia and the 26th largest in Florida. Ameris has employees – which they call teammates – within its Atlanta-based corporate offices and more than 165 locations across Georgia, Alabama, Florida, North Carolina and South Carolina.

"I'm proud of the work we've done here at the bank," she says. "We produced a very team-oriented culture. It's ok to make a mistake as long as you have a plan to fix it. Best of all, our people are open to change."

Stephanie believes that indications of character are an important bellwether. "If you hire someone with a strong work ethic and a good attitude, then they can learn the business. "

This culture extends to the team that Stephanie runs. “I want them to feel comfortable coming to me if they made an error, and I certainly want them to tell me if there are things I could do better," she says. "This is probably the most important indicator that we are running an empowered organization, which is much more productive."

In a much more competitive labor market, it has become harder for all companies to recruit top candidates. "We're always looking for ways to improve the teammate experience," she says. "We are also looking at sticker benefit products to help with retention."

Stephanie partners closely with the company’s DEI Officer to make sure equity and inclusion is woven into the fabric of the company. “It’s an important aspect of our culture, so we work together to celebrate the diversity that makes our company strong,” Stephanie said.

Another area of focus for the bank is automation to drive efficiency and consistency.

As HR has moved to a more strategic role within companies, there remains a strong “customer service” element. "We are here to drive a strong culture, but there are elements of serving our teammates that remains constant," she says. "For example, if an employee's marital status changes and her healthcare has to change too, this might not be a big deal for our HR team to execute, but it’s important to our teammate that we provide the right guidance and make the change fast and get it right."

Through it all, Stephanie is constantly looking for better ways to do things. "Being open to change can be a secret weapon if you employ it the right way," she says.

She is proud to be an executive leader at the bank but firmly believes that she did not get where she is today on her own. "People believed in me, empowered me and trusted me," she says. "I have a lot of loyalty to my team and the bank."

By using open lines of communications and being fully transparent, Stephanie strives to empower the leaders working for her as well. "I try to be a good mentor and lead by example," she says, "so we can effectively solve all of the problems that have been thrown at us over the last two years."

Stephanie has both PHR and SHRM-CP certifications. She has served on the Georgia Banker’s HR Committee and has been a member of SHRM (Society of Human Resources Management) for over 20 years.  Recently, she became a member of the newly formed Talent & Culture Council of Georgia.